As you saw it happen on social networks yesterday I participated in the 3rd edition of the Spahis Race in Valence, a 12km urban trail and 40 obstacles, organized in the heart of the city which houses the 1st Spahis Regiment (You can cross them sometimes in the morning running in town;)). A first for me, it left for a report of the race and of course my opinion!

What do we promise?

The slogan is clear: “If you have the soul of a warrior engage you and come to take up the challenge”! We are promised to surpass ourselves, water, mud, sweat, good humor, challenge, escalation and even vengeance on the part of Métiffiot the automobile partner (see their video right here) ! 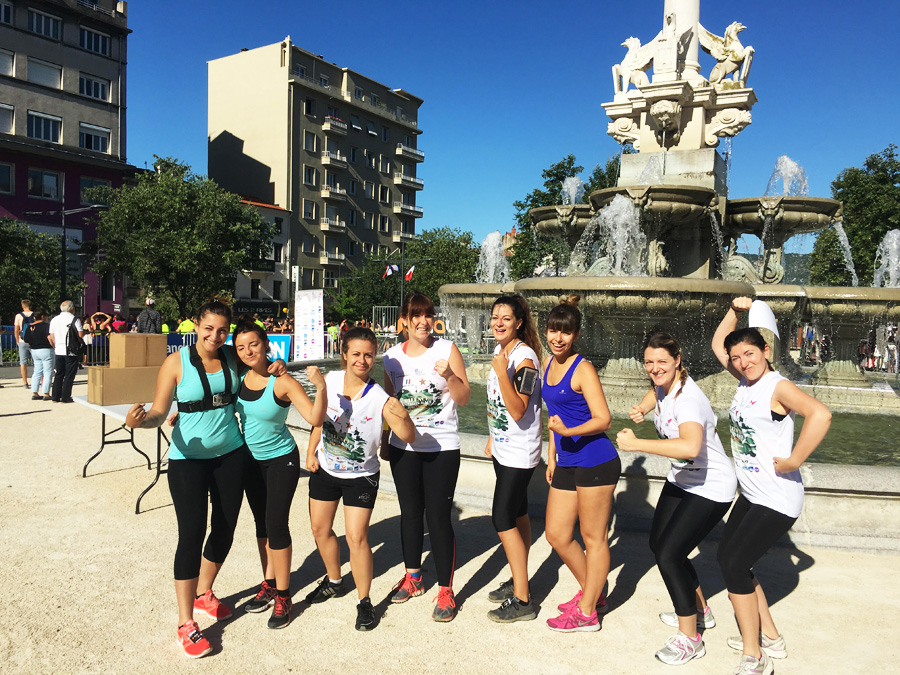 What do we have?

A race very well organized for its only 3rd edition, volunteers very present, the race begins with a warm-up orchestrated by Inaout, gym in Valence, and watched by a soldier who does not hesitate to raise the tone if not followed Not the instructions. When everyone is well burned (training at 9:30 am on a Sunday it wakes up more than one;) ) is the top start!

Departure of the Monumental Fountain, direction of the underground parking of the field of Mars, passage in the park Jouvet to join the new park of the Epervière by the banks of the Rhone, the heat is at the appointment of very early, the view is top . 2km after the start we find the first obstacles: cross a pile of tires, ok easy, we continue the race and there first container: when we think climbing it will be the most difficult but ultimately the downhill promises to be very hard! Turn around, put your legs in the void holding yourself up and slide on your stomach .. It’s left without difficulty for me, hence the beautiful blues on the arm that you could see on Snapchat!

Then we find ourselves in the old bowling to jump over the furniture that was used to store the balls, to crawl to the place where we have known playgrounds, a net above us in the darkest total , Loudspeakers spit out noises from shots, helicopters, the atmosphere is at the rendezvous! Go out of the bowling and jump into the void, be cushioned by an enormous mattress, run back to a large building a little frightening (you imagine right inside), walk in a stream that crosses the property in the middle Trees, flowers, we even wonder if we are still in Valence.

The path continues and I forget things but we descend from the embankments, we find ourselves in a small river, inside a very dark tunnel with only a line of life and the current of the icy water in the The legs. The legs are heavy but we struggle. Continue to land at the Trinitarians’ Park, climb up slopes, go down paths that are not paths, climb walls of ropes to continue the path. To cross the center to find oneself in the old town and especially in the old disused swimming pool (that which will become the city of Gastronomy of elsewhere) filled for the occasion of a water a little shady). Climb gates, walls, containers, go down the other side, jump, hang, crawl through big pipes, pass over cars, cross containers in the black full of smoke, crawl back up into The big pipes, and finally climb on the last wall in ropes to arrive on the field of March and say: YES I SAY IT! 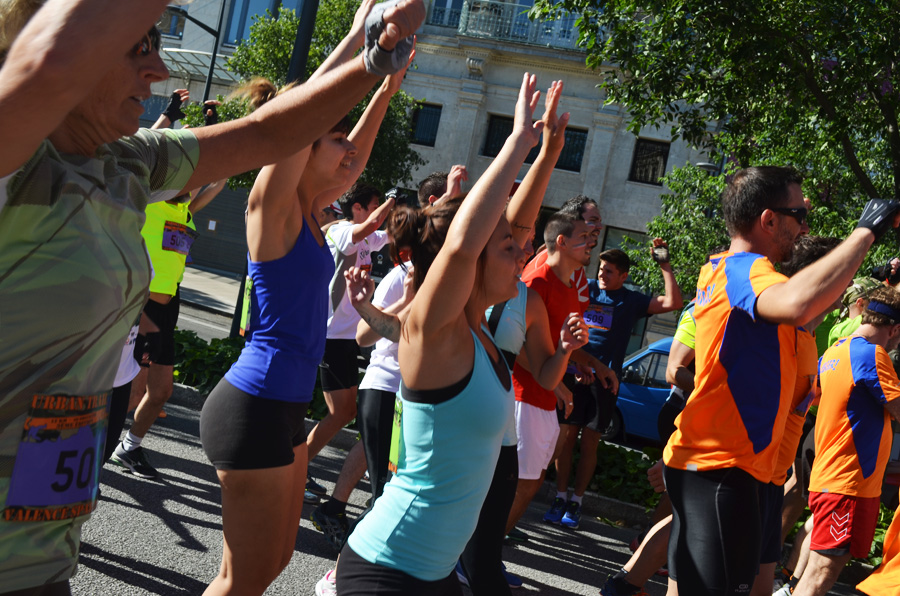 I was able to read that some of the first wave had had problems with the switch and had missed part of the race. On our side no worries except that we were not called in the right wave (we had to leave at 9:20 am we finally left at 9:40 am) nothing very serious about us, on the contrary all the volunteers along the way Were positive, encouraging and cheerful!

I expected more waiting on the various obstacles but we had to wait only 2 times and on walls of soft ropes, not easy easy so not fast at all 😉

The only problem for me who lives in the city without a car: the delivery of the numbers on a Saturday at Décathlon (at the Plateau des Couleures for those who do not know it is unavoidable at the weekend), even more the second weekend of sales !

Otherwise a nice shirt, a goblet and a bar of cereals in the bag of departure, 2 refreshments in water at the 6th and 9th kilometers, a nice medal and a good supply well supplied on arrival! 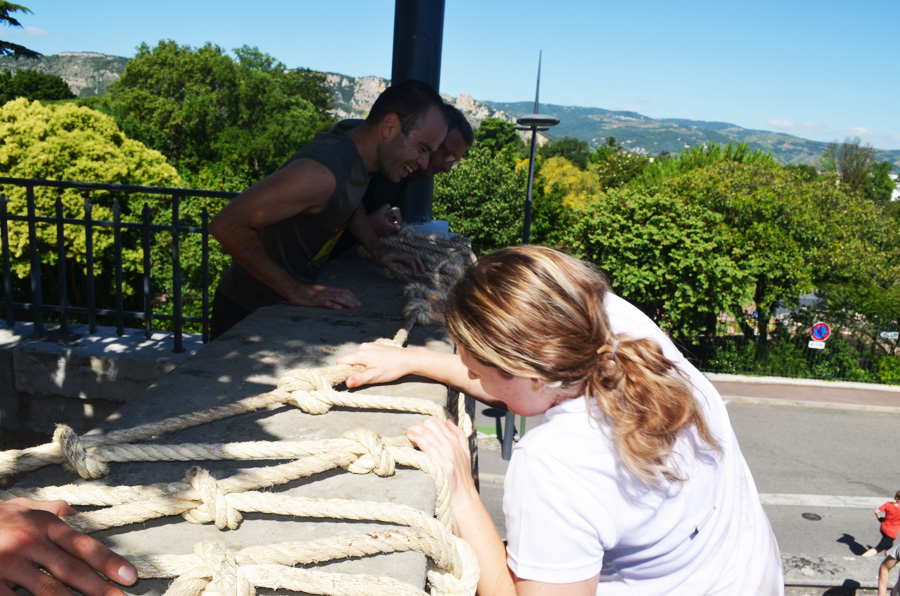 It is a race that demands a preliminary training, it would be only running to hold the 12km, then at the obstacles level nothing is insurmountable but one must have a little strength and a lot of will, not be afraid of Get wet / dirty! Personally today I only hurt muscles that I rarely work (at least now I will focus on it to be at the top next year!). From a general point of view, I said that the obstacles are quite difficult to surpass but not insurmountable. 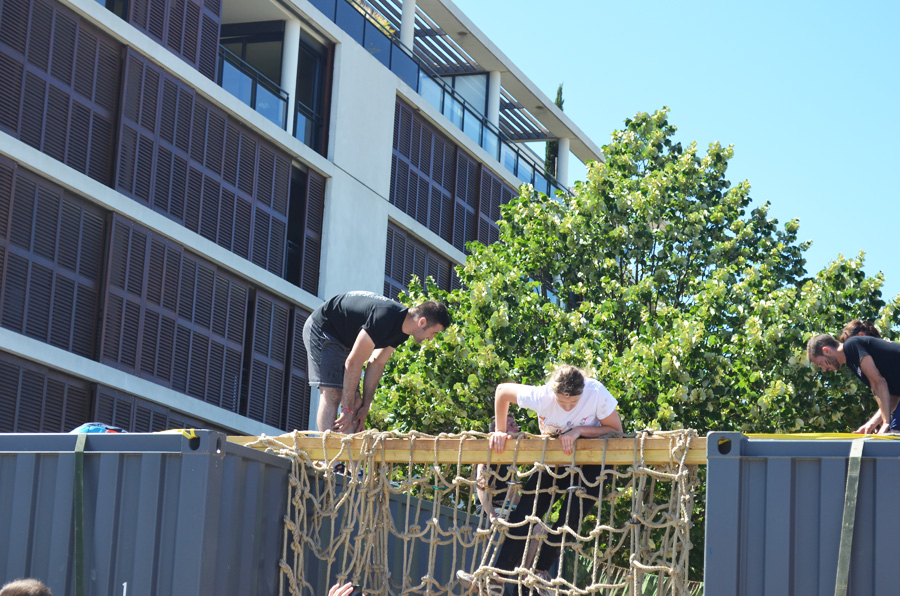 The amount per team was 30 € per person and 35 € in individual, knowing the values that the army defends and the nature of the race the team version is strongly recommended. Part of the prize went to the HandiSport Drôme committee! 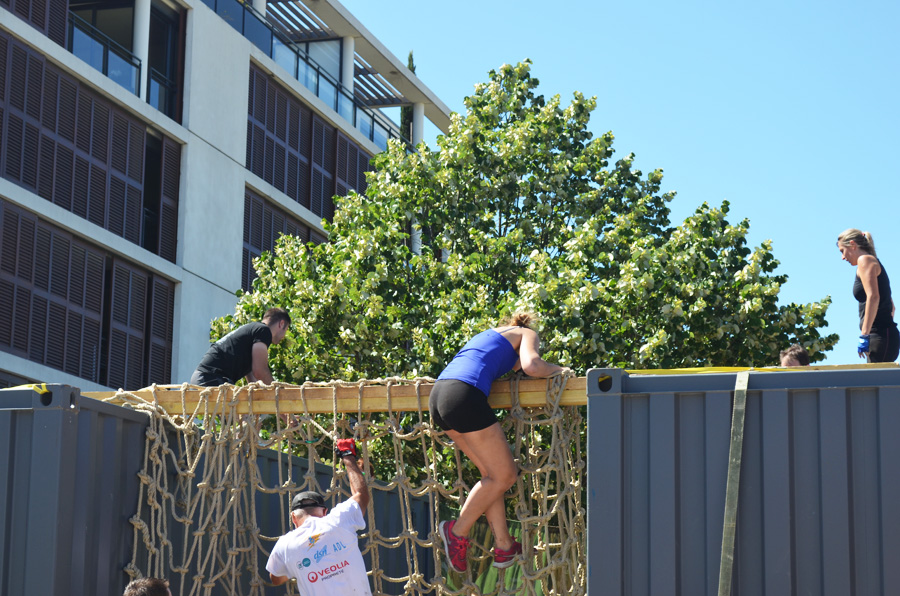 I had participated in the Mud Hero in Toronto last year (I told you everything here), it was 6km for 22 obstacles, I was sporting since .. 4-5 months, it was a challenge. This year I doubled the distance and the number of obstacles and especially I did this at home !! It is undoubtedly a race that I will do again and I recommend, I loved the atmosphere of solidarity, team spirit, the desire to surpass myself since these are the values ​​I also convey through the #BeFringFitCrew.

I loved the idea of ​​seeing the city differently, I never thought of going through the old bowling (where I spent several evenings younger) crawling! The great property we have gone through? I had already seen her and I did not know at all that she was so pretty! I could say I swam in the pool before it was destroyed! I especially like the way they have hijacked every place in Valence that we are used to knowing as “civilians”, key places in the city to places I did not know at all!

Since yesterday my footsteps are fragile, the blues well present, every movement is calculated to limit my efforts and therefore the pain but this is nothing beside the happiness of having exceeded!

A big thank you to the Spahis for making us live such a beautiful experience, to all the volunteers who ensured in their job and to all the participants that we were able to meet that showed a good state of mind !!

You did it ? Are you tempted? Tell me everything in the comments!

A huge thank you to Noemie for the photos and to have kept my bazaar (which allowed me to snap a bit before and after the race;) ) and the cherished Claire and Gaelle for the photos too. Thanks to our 3 fans! Thanks also to the person who shouted “Go Fringinto” and that I did not know it was too nice! 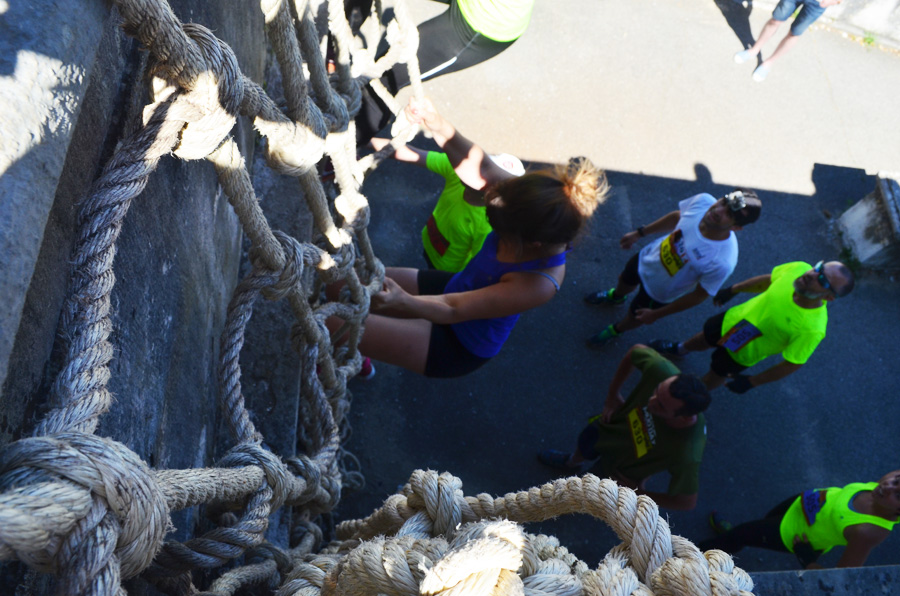 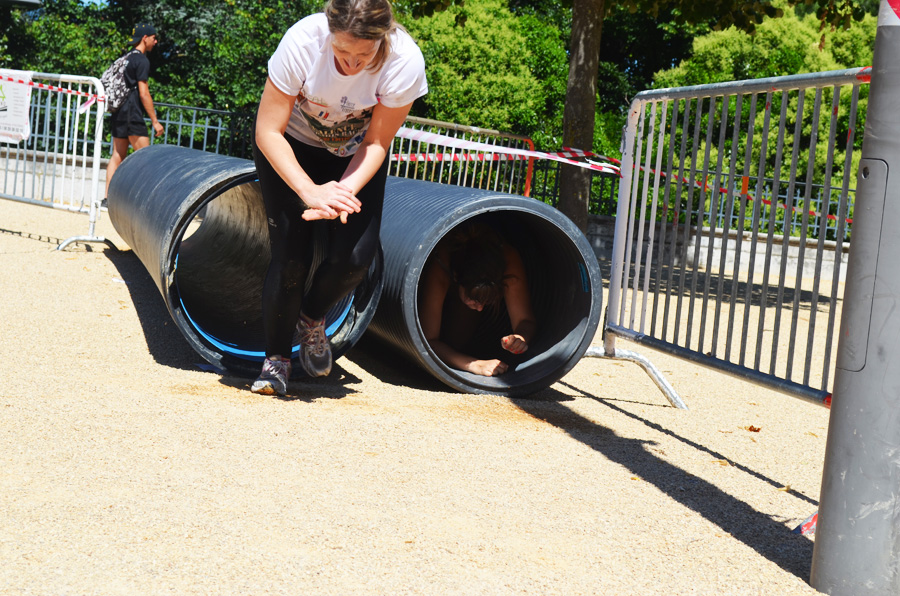 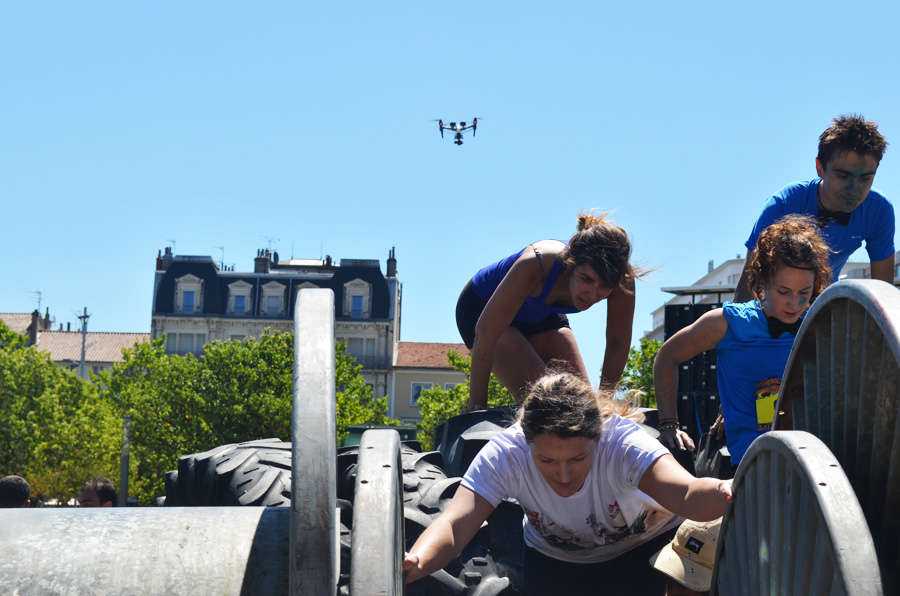 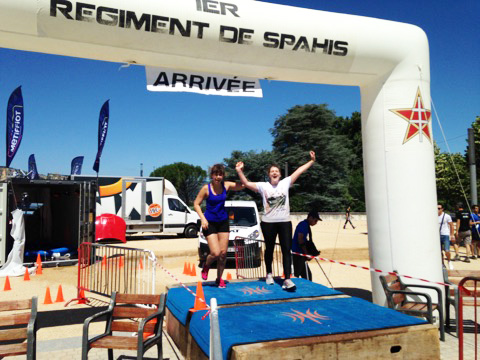 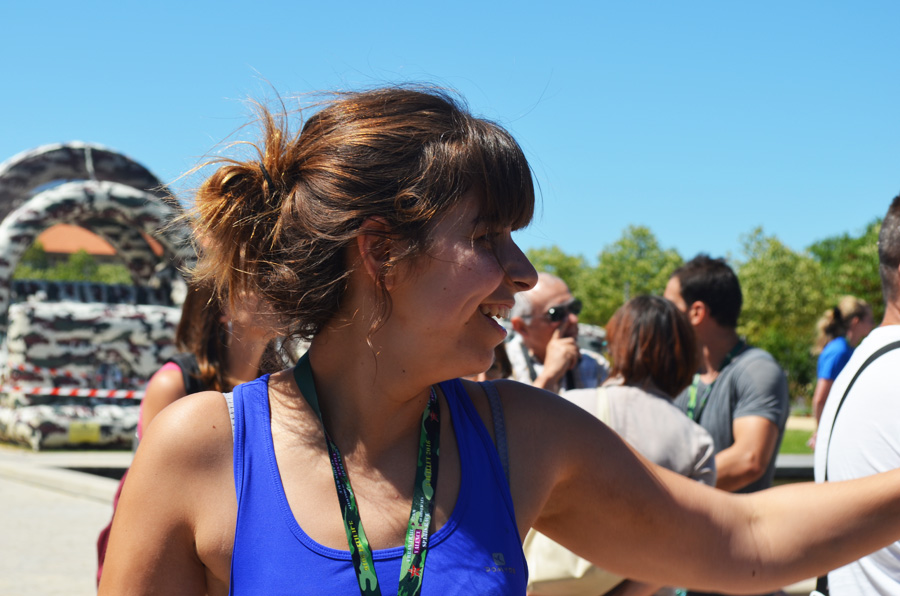 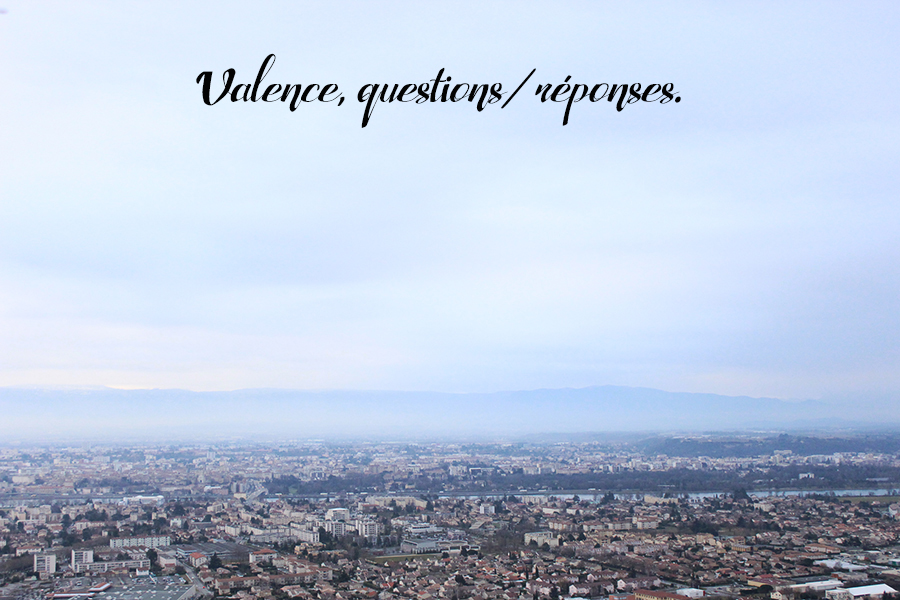 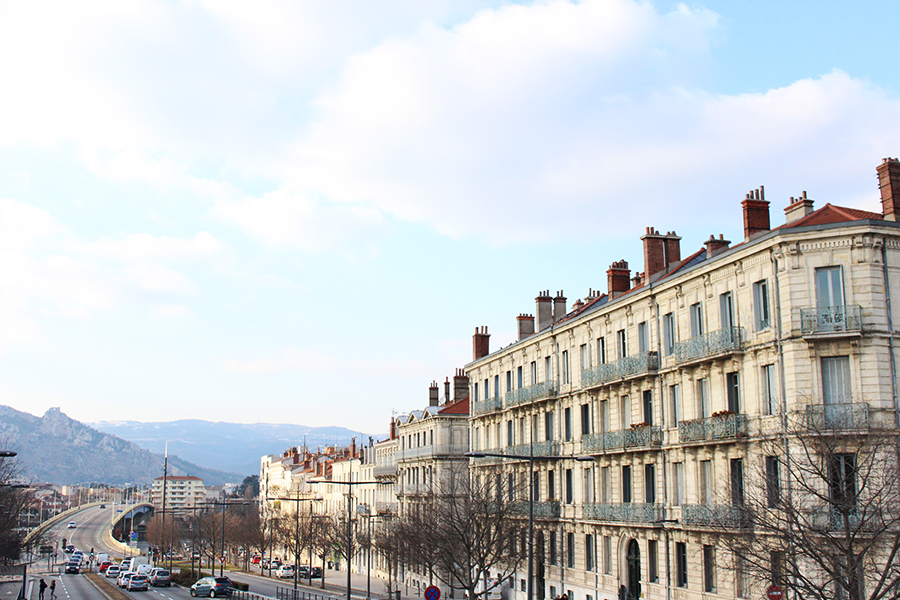 Summer I love U